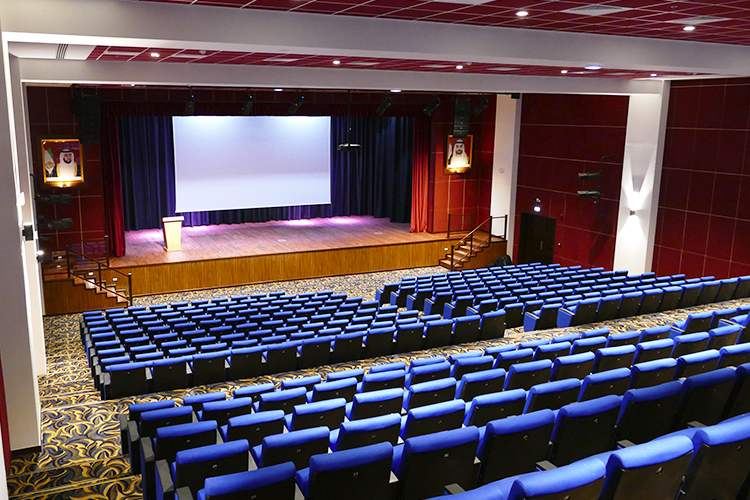 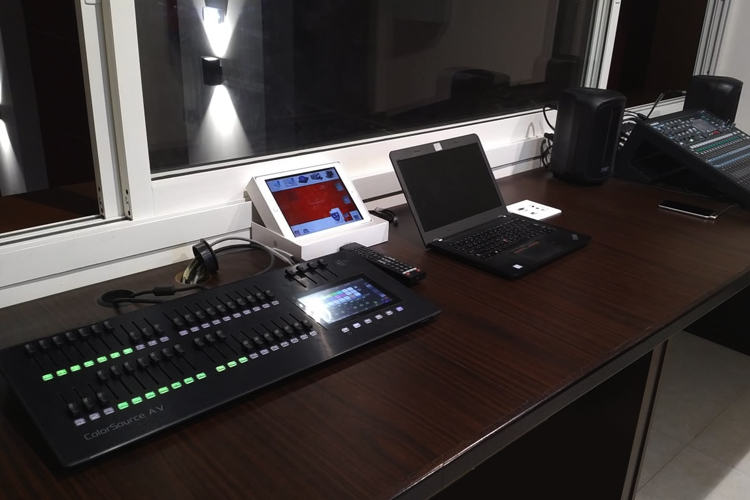 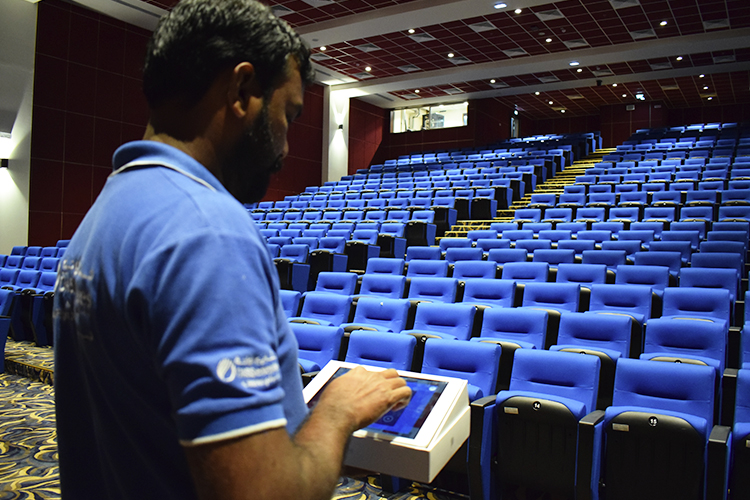 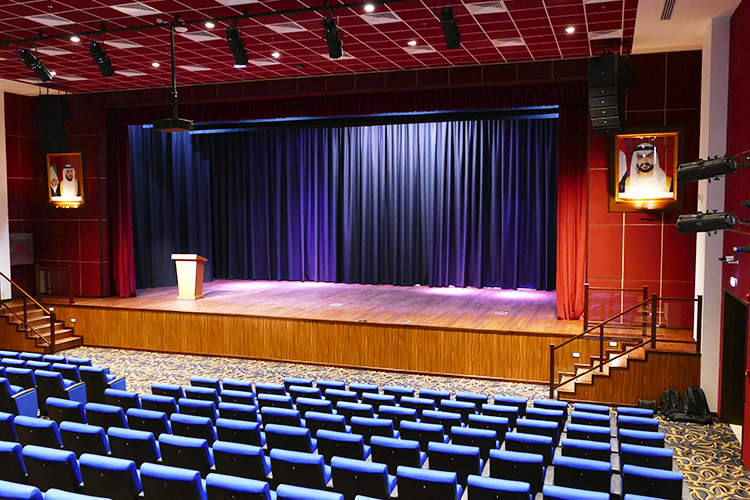 Oasis Enterprises has taken charge of another full AV fit-out at a brand-new auditorium in the UAE.

Having been handed total responsibility for the construction of a brand-new school auditorium at Al Mawakeb School earlier in the year, Dubai-based distributor and systems integrator Oasis Enterprises had already proved its capability far exceeded the simple erection of a ceiling-mounted lighting bar. Like several other companies in the region, the distributor’s remit has broadened significantly in recent years as it evolves beyond pure distribution to a full-service business model.

Oasis’ all-encompassing work on the previous project clearly did not go unnoticed. With a similar desire to be able to hold its own large-scale productions and events in-house, the Al Ain English Speaking School (AAESS) approached the Oasis Enterprises projects team just a couple of months with grand visions of their own. Several months later, the result is another completely new auditorium construction, with Oasis serving as overall general contractor and handed free reign over all aspects of the design, from acoustic absorption right through to the seating materials and carpet pattern.

“In this age of digital, Schools and Universities are increasingly integrating cutting-edge (ProAVL) technologies in auditoriums in order to modernize the campus experience for students raised in digital-age. As a company we take total responsibility in delivering that.” – Basel Al Aref, Oasis Enterprises GM.

While Oasis had surely learnt some lessons at the previous site, the new auditorium at AAESS came with an additional set of constraints and challenges to negotiate. Senior project manager of Oasis’ professional projects division, Wessam Abd El Wahed, steered operations through to completion from the outset.

‘Having seen the result of our last fit-out, our client appointed us to create a similar experience at AAESS,’ he explains. ‘We first stepped inside the new building at the beginning of April, which meant we had just a couple of months to complete everything – the gypsum ceiling and acoustic walls, the seats, carpets, wooden stage flooring, curtain system, stage lighting and AV systems. It’s easily been the fastest realisation of a project ever for Oasis Enterprises.’

The parallels between the two projects are great. From an AV perspective, the designs are remarkably similar, just with a different set of equipment accomplishing the end result. Yet, the extra time constraint, in tandem with negotiating with a multitude of subcontractors, meant that a copy-and-paste-type methodology would never work.

‘In April, we began arranging and placing orders for all subcontractors so that the work would start on time,’ notes El Wahed. ‘We had many meetings with our subcontractors to discuss issues and avoid any mis-planning. It was important we applied the proper pressure to everybody, and I was in control to avoid any slipping of the timeframe. This has enabled us to complete the whole project in less than 100 days and without any delay.’

With the acoustic treatment forming one of the costliest aspects of such a project, some changes to the materials were made to meet budget requirements, resulting in the selection of 25mm-thick WoodWorld acoustic foam boards wrapped in Cara fabric from Camira. To retain upgradability, Oasis has also provided provision behind the panelling for additional speakers and power lines for future system upgrades.

From a user perspective, audience members are greeted with a sophisticated interior design that doesn’t detract attention from the performers onstage. This is combined with powerful audio from the L-R hangs of five FBT Mitus 206LA line array elements and Mitus 118FSA subwoofers per side to cover all 506 seats, with management from a BSS Soundweb London BLU-100. A pair of FBT StageMaxx 12MA monitors provide onstage foldback.

This is joined by four channels of SLX4 wireless mic systems from Shure to support presenters onstage and is mixed from the rear control room on an Allen & Heath Qu-16 via 5-inch FBT J5A monitors. Dual Shure UA844 and UA874 antennas ensure there is no loss of signal throughout the venue, while several connection panels have been integrated into the stage to provide PC, audio – via a 16-in/eight-out Allen & Heath AB1608/X AudioRack – and HDMI patch-in capabilities. Elements onstage are highlighted via a selection ETC fixtures, including seven ColorSource CYCs, 10 ColorSource Spots, 16 ColorSource PARs and 10 SourceFour Zooms mounted both on bars above and to the side of the audience as well as directly above the stage. These are controlled via an ETC ColorSource20 AV console located in the control room. Finally, Oasis has hung a Hitachi CP-WX9210 projector from the audience lighting bar that fires onto a motorised 7m x 4.4m screen from Best Vision.

All the Cat-6 cabling from the lighting is fed into a Cisco SG300-28P PoE switch. An integrated Extron IPCP Pro 50 processor was selected for centralised AV control of the venue and pairs with an 8×2 BlackBox AVSC-0802H presentation switcher. Control system inputs feed a Linksys 24-port PoE switch connected to a dual-band N600 wireless access point enabling full control of the AVL systems to be achieved from an Apple iPad running a bespoke Oasis user interface. Additional equipment includes a Datavideo PTC-140TH PTZ camera and H.264 USB recorder, as well as Black Box HDMI splitters that connect all of the patchbay’s HDMI connectors back to the switcher.

The resultant theatre bears all of the signature hallmarks of Oasis’ other noted references. ‘Everybody at the school has really embraced the new space and is asking how this project was finished in such a short time,’ says El Wahed. ‘I explain to them that this is the way that Oasis works: we plan properly, we follow up properly and we study all of the details. That’s why we always reach the end of projects on time and without any major problems.’

The school recently got the first chance to make use of the new auditorium. All 506 seats were occupied, while an additional 200+ excited schoolchildren filled the aisles. ‘The auditorium was full of people and served its purposed perfectly,’ the project engineer concludes. ‘The school now has this large, fully equipped auditorium to use as they choose, and the client has been really impressed with our work. As they are building another school in the near future, there is a high probability that we will work together again.’