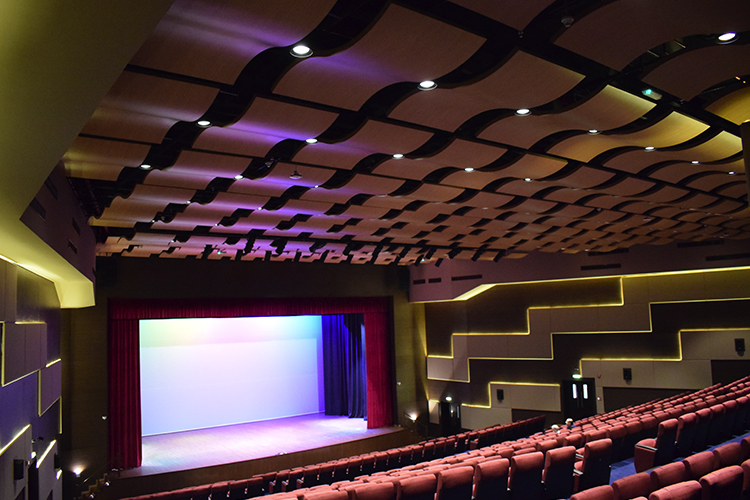 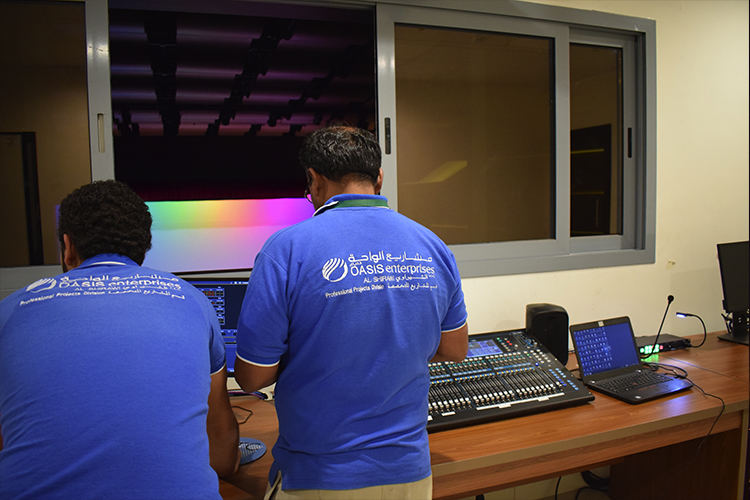 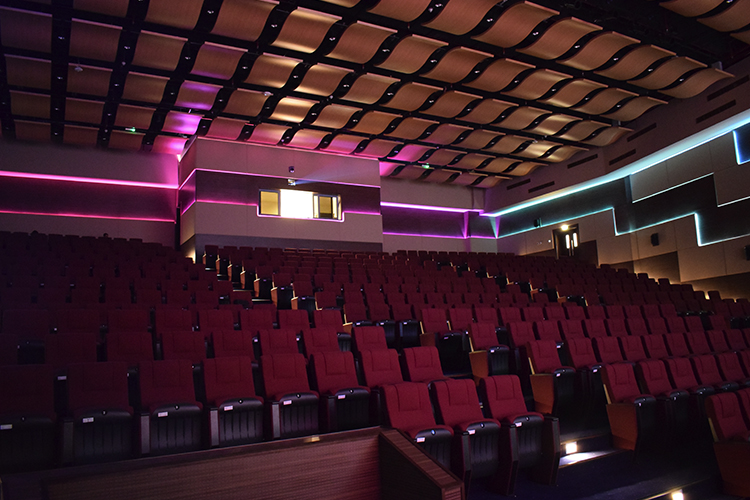 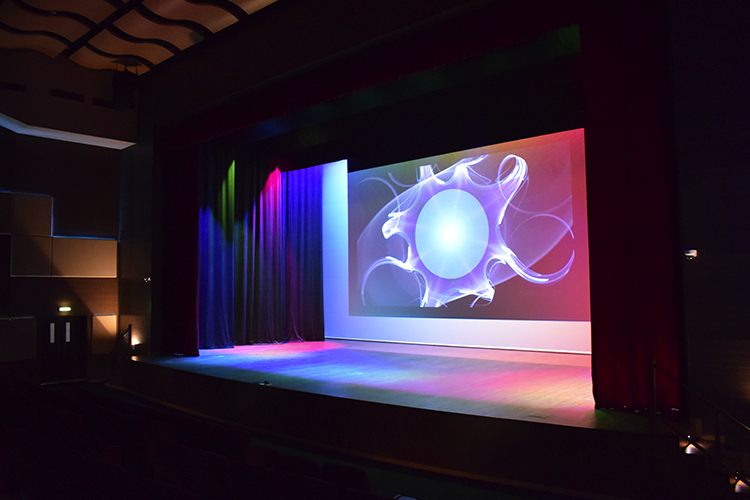 Dubai, UAE: Highly regarded as a specialist installer of AV system technologies within U.A.E.’s educational sector, Oasis Enterprises Professional Projects Division (PPD) recently graduatedto take a new level of competence. Impressed with their credentials and references, Al Mawakeb Schools upon the Dubai-based AV systems integrator to take on the entire construction of the auditorium being built at the school’s third site located in Al Khawaneej. The client, AMSI (Academia Management Solutions International), commissioned Oasis Enterprises PPD to create a multi-purpose venue that could stage theatrical, musical and dramatic productions in addition to graduation ceremonies and educational presentations. The scope of this tender went beyond the lighting bars, theatre proscenium and control room to envelop the acoustic surfaces, seating, carpeting and other aspects normally beyond the remit of an AV installer.

Senior project manager Wessem Abd El Wahed was charged with the added responsibility of meticulously selecting and managing sub-contractors, who would ultimately mirror Oasis’ professionalism. In his role, Mr El Wahed benefitted from a simplified chain of command, allowing him to liaise directly with the client, AMSI (Academia Management Solutions International). ‘This project differed from others as were made the general contractor for the overall project, including the interior design and staging,’ explains Mr El Wahed. ‘We’ve garnered a great deal of experience over the years, so we were also charged with the acoustical works including the choice of carpets and audience seating.’

Planning the auditorium’s full turnkey solution started in 2017 including the design, supply, installation and commissioning of the auditorium’s stage and house lighting together with the control room set-up. ‘As we were effectively leading the project, it was our responsibility to hire sub-contractors for the acoustic works, furnishings and carpentry for example. These were selected according to relationships based on experiences together with the high quality of workmanship demanded by the client.’

The fire retardant acoustic works include high-density absorbers, laminated wall panels plus wooden frames composed of fibreglass and acoustical foam. A laminated plywood-ceiling wave produced by a local manufacturer has been installed to maintain reflections from below and absorptions from above.

Mr El Wahed attended multiple meetings and scoping sessions with AMSI director of operations Dany Jarjous and consultant Archen Engineering, ultimately leading to the creation of a 3D simulation design of the theatre. Following some modifications, the plans were finalised and the contractors called to site in April 2018. ‘We had to control all aspects of the construction – including health and safety – together with time scheduling of the sub-contractors on a daily basis.’

The resultant theatre bears all the signature hallmarks of their other noted references dotted around the Emirates. For the audience, discrete technology – including the in-wall LED’s with colour-changing RGB’s and powerful SPL’s evenly distributed to each of the 528 seats – doesn’t distract attention away from the performances. For the technicians, neatly channelled cabling conduits, Wi-Fi control and ease of use features allow the stage to be transformed quickly and effortlessly provide peace of mind. Presentations and lectures conducted from a mobile podium connect laptop, gooseneck microphone and other inputs to the VGA, HDMI , networks and audio connection panels built into the stage. Additional wall boxes provide added flexibility including additional lighting outlets for grander productions.

Naturally, the Oasis Enterprises PPD team had to negotiate further challenges as the auditorium took shape during its’ construction. ‘We had to raise the height of the air conditioning ducts in addition to the positioning of the gypsum bulkhead running along the sides of the auditorium,’ furthers Mr El Wahed, furthering his claim that the range of their works went beyond the normal AVL contractor remit. ‘We also had to re-design the slab level steel structural support for the power in addition to the ceiling wave paneling. Health and safety was paramount, so we followed up all safety requirements with each sub-contractor on a daily basis.’

Located in the rear control room, audio mixing is conducted from the control surface of an Allen & Heath Qu-32 console that receives its’ inputs from an Allen & Heath AB168 stage box wall-mounted within the wings of stage left. Speakers, performers and orators are intelligibly reinforced courtesy of the Shure SLX wireless system comprising four SM58 hand-held and two SLX14 tie neck models. Dual UA844 and UA874 antenna distributors ensure there is no loss of signal throughout the venue. Vocalists also benefit from wired SM58 hand helds, whilst musicians rely on PGA81 clip on mics and the choir use MX202 Microflex overhead models.

Oasis opted to install an active L-R line array system comprising of four  FBT MITUS 206-LA modules and a single Mitus 122 FSA subwoofer per side as the main loudspeaker system. Loudspeaker management including presets for various room modes is catered for with the inclusion of an FBT DLM-26 processor. In accordance with the school’s wishes form film screening, a surround sound system has been added in the form of wall mounted FBT J8a two-way cabinets. Finally the BOH areas receive announcements and BGM courtesy of an FBT CSL 840TIC ceiling speaker system.

Installed in the rear control room, a Digital Projection 10,000 ANSI-lumens E-Vision projector enhances the theatre’s multi-purpose use. A Screenline BL850 384-inch diagonal 8.50m x 4.78m motorised screen located above the stage can be lowered into position via the touch screen. A Blackbox AVS808-H HDMI matrix receives inputs including a Blu-ray DVD player and outputs these to the main screen, a Dell monitors and Samsung 55-inch displays in the BOH and pre-function zones.

Datavideo camera inputs including BC-50 block and PTC-150 PTZ models connected to from an RMC-180 controller are fed into an SE-1200 6-input HD switcher that is interfaced to an RMC-260 panel. The Datavideo package also incorporates an HDR-70 recorder and an ITC-100 8-channel intercom system for BOH operations.

112 Lucibel Spot house lights assembled on lighting bars constitute the bulk of the auditorium’s luminary inventory. These can be dimmed from a number of presets stored in the ETC Echo Din system. In addition, an extensive selection of ETC ColorSource Spot lights, fresnels, pars, LED’s are controlled from an ETC Element 40 desk that is also located in the rear control room.

All the CAT-6 cabling from the lighting is fed into a Cisco SG300-28P PoE switch. An integrated Extron IPCP Pro 50 processor was selected for centralised AV control of the venue, for which operations are conducted on an iPad Air2 tablet. Control system inputs fed into a Linksys 24-port PoE switch connected to a dual band N600 wireless access point. Once the house lights have been dimmed, the scene is set very quickly. Two fire retardant 22m wide x 9m height stage curtains weighing 350kg can be drawn effortlessly by electric motors from the touch of an iPad GUI.

‘This project differed from others as we were made the general contractor for the overall project, including the interior design and staging,’ adds El Wahed. ‘Owing to the tight time frame in which we had to complete in addition to the high-quality workmanship demanded by the client, we only appointed subcontractors that could be wholly trusted from our previous experiences. Making a contribution to the school’s profits, the theatre is now ready for the school’s activities and events. Naturally, Oasis Enterprises PPD was on hand to deliver [the requirements] as and when the need arose.’

Even with a seamlessly run project, there are always new lessons to be learned but Basel Al Aref, general manager at Oasis Enterprises PPD, is pleased with the outcome. ‘Ultimately, we’ve provided a powerful, integrated AV and lighting solution that enhances Al Mawekeb Schools’ auditorium capabilities and that will no doubt accommodate their forthcoming technological advances and evolving needs.’