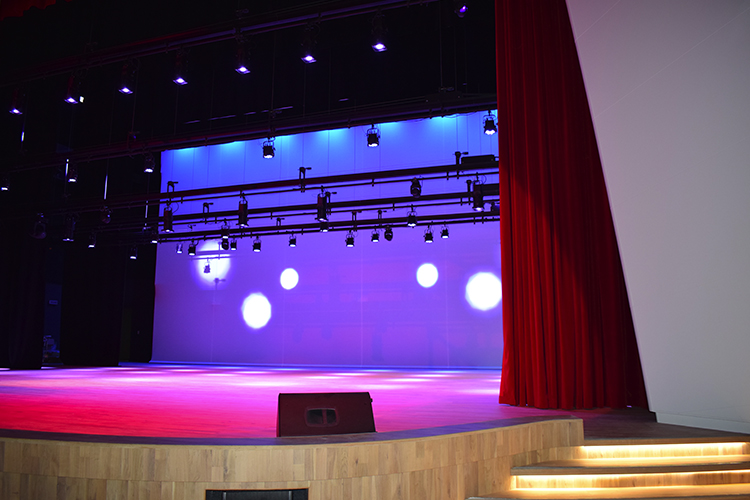 UAE, DUBAI: Deep within the 55,000 sq-m teaching space, its’ budding students are developing their artistic talents within a world-class 600-seat auditorium.

Most private schools in Dubai today boast a theatre that goes some way towards enticing many ambitious expatriate parents to enlist their children. Should their 15-year old daughter’s grades be below par, what better way of soothing the anguish than a rousing end of year ‘Sound of Music’ spectacular with a super trooper trained on their child prodigy. Whilst being equipped to hoist lighting and scenery with its very own ETC Lighting Prodigy system, SISD has certainly raised the theatrical arts venue bar in the U.A.E.

Having successfully tendered for the project, Oasis Enterprises LLC soon discovered that this was no ordinary school auditorium as project manager Mahmoud Wessam explains. ‘Having won the contract in 2015 – the year when the school started teaching students – it would be another three years before we could commission the venue. In addition to extensive construction works which were delayed by some eighteen months, the SISD demanded the best acoustics for the space. During that time we worked closely with the consultant Jasper Whittaker from Innovation in creating the A/V, lighting and other theatrical designs.’

The electrical equipment racks were assembled at their Dubai service centre, whilst the fibre, loudspeaker and DMX cabling was routed from the stage to the control room, patchbays and numerous facility panels. ‘We had many meetings with the general contractor and Jasper, who was extremely experienced in terms of detail. Time again we were called upon to overcome numerous obstacles on a day to day basis, but Jasper would always make himself available in helping us negotiate unforeseen problems.’

One of the main briefs of the tender was to create a theatre that could be operated by non- specialist technicians. ‘Today’s venues are designed more for IT-savvy operators,’ furthers Mr Wessam. ‘Everything from the GUI to the pre-sets and the on-off switches have been designed with simplicity in mind. Nobody wants a dissatisfied client and none of us like a late night phone call as the operator cannot work out the dimmers on the LED’s.

Whilst Oasis Enterprises was also responsible for installing the audio system and lighting infrastructure into an adjacent Black Box theatre, the bulk of the works were confined to the main theatre. The scopes of their on-site activity related to the integration of the sound reinforcement, video projection, stage lighting, house lighting and motorised rigging and control systems.

Depicting more than the red and white colours of the Swiss flag, the lighting design wouldn’t look out of place in London’s West End and incorporates eight lighting bars for both lighting and scenery. A Prodigy P1000E remote controllable system is equipped with an extensive inventory of ETC fixtures including 42 Source Spots, 12 Source 4 LED fresnels, eight XLR Spots and 24 XLR Pars. Six Martin Rush MH7 hybrid moving heads also occupy their place on one of the bars. In addition, the left and right theatre walls host smaller fixed vertical bars loaded with ETC Source Four Zooms. The SISD technicians operate the lights from the keypad of an ETC ION xe lighting control console that integrates four dedicated encoders for non-intensity parameter control, grand master and blackout buttons together with a master split fader. Should technical confidence grow, those techies who prefer hands-on control can utilise the 2×10 and 2×20 USB fader wings for up to 300 additional mapped sub-masters or 200 cue lists with paging controls. External high-resolution Windows 7-compatible monitors provide multi-touch screen control.

Just as the sophisticated lighting technology matches the acoustic grandeur of this venue, the visuals have certainly not been watered down in an attempt to balance the budget as the project neared completion. Located above the stage, a motorised Screenline Biglodo projection screen can be lowered to receive HD images from the Panasonic PT-RZ970BE 9400 ANSI lumens projector installed in the rear control room. Source inputs including a Blu-ray DVD player are fed through an Extron 8-in 4-out scaling presentation matrix switcher with DTP over HDMI twisted pair receivers. The A/V parameters can be controlled from an iPad Air2 tablet via Wi-Fi courtesy of the Extron IP Link Pro Control processor that has been added to the IP infrastructure.

Depending on the function, the main SISD podium can be portably positioned over one of two stage panels for headmaster, lecturer or speaker presentations. Equipped with a Shure MX418S gooseneck microphone for speech, VGA and HDMI inputs enable content to be shared and presented from a laptop. Additionally, a NovoPro+Launch wireless presentation system has been added to promote collaboration with the audience when required.

Providing low latency audio transmission over single Cat-6e cabling, the Oasis Enterprises team successfully installed a Dante network within the theatre. Crucially this allows the in-house technicians to configure, manage and control the audio parameters from the iPad Air2 tablet or a PC over the network for which a Zykel GS1920-24HP 24-port managed POE switch lies at its’ heart.

Mr.Basel Al Arif (GM at Oasis Enterprises) states “by delivering such a calibre of auditorium project equipped with world-class solutions not only shows our strength, but our ability to meet the need for contractors and the design community who are also gearing up for the iconic event Expo 2020 Dubai – will be a festival of human ingenuity.”

Inserted with an NY64-D Dante expansion card, live mixing is conducted on a Yamaha TF-5 32-channel digital control surface connected to a TIO-D1608 Dante-equipped I/O rack over the EtherNet network.

DSP configurations and pre-sets are created and stored within a Biamp Tesira Server I/O providing signal routing and mixing, equalisation, filtering, dynamics and delays through the Tesira designer software. Outfitted with Tesira SIC-4 input and SOC-4 output cards, the digital network server allows PA announcements to be made to both the theatre and BoH areas from a Cloud PM4 4-zone paging microphone. A Tascam SS-R 250N recorder player can also be called upon for both pre- and post-function playback. The young performers and speakers can utilise up to four channels of Shure QLXD4 wireless microphone receivers and transmitters including lapels, Beta57a and Beta58 hand held models. The 32m length x 22m width theatre demanded the installation of a UA844+SWB antenna and distribution system together with a UA874WB active directional antenna to ensure clarity of signal throughout.

An L-C-R FBT Mitus loudspeaker system provides the audio reinforcement for the venue. Wall mounted at a height of 3.0m, single Mitus 152 15-inch two-way cabinets provide the L-R coverage, whilst a pair of Mitus 115 models cover the central seats from a ceiling hoist that can be further lowered when required. Dual Mitus 118S subwoofers located under the stage provide low frequency extension. Three FBT Archon 108 8-inch cabinets provide rear seat delays, whilst a further four Archon 108’s have been installed into the lip of the stage for providing an even dispersion of SPL’s in the seating towards the front. A pair of J-8 speaker round off the FBT contribution as control room monitor speakers. The extensive speaker system is powered by a combination of M5000-4, T-Five and M-2800-4 amplifiers from fellow Italian manufacturer Outline Audio. Mr.Basel Al Arif (GM at Oasis Enterprises) states “by delivering such a calibre of auditorium project equipped with world-class solutions not only shows our strength, but our ability to meet the need for contractors and the design community who are also gearing up for the iconic event Expo 2020 Dubai – will be a festival of human ingenuity.”

Finally, Mr Whittaker added a showbiz touch for those dramatic production entrances. Weighing 200kg each and measuring 9m in height x 8m in width, two 400gm/m Rose Fabric IFR crimson red curtains can be quickly drawn at the touch of a stage left knob on the overhead motorised tracking system. It’s doubtful that the school principal will ever request for the Look Solutions Viper 2.6 Fog generator to be added as part of his own stage effects. Like Lake Geneva, the atmospheric conditions outside the school on the edge of the Creek are capable of occasionally producing a natural haze. However, it could host any world class production should it wish to do, but without the baggage of experienced touring engineers.