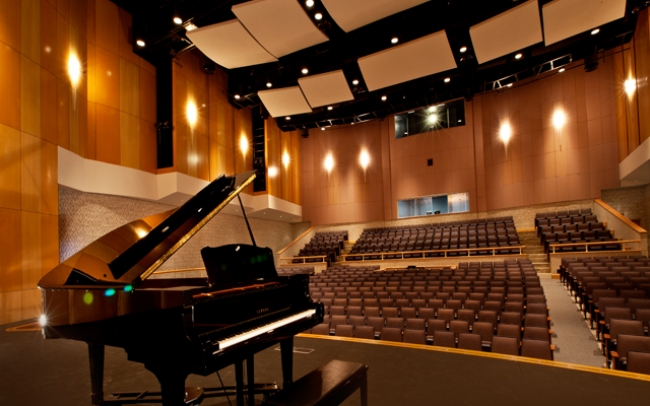 Middle East : Oasis Enterprises recently delivered audio, video and lighting systems to the Bosch Center at The American International School Muscat in Oman (TAISM). The centre’s 524-seat theatre was specifically designed for educational and performance purposes, and serves as a venue to showcase the arts.

”…like Oasis PPD which has the connections and current knowledge of what works best.”

‘Watching the opening night under emergency lighting (due to a power cut in the Ghala area of Muscat) was not ideal,’ admitted David Gray, architainment manager for Oasis. ‘Having said that, I was in the back row listening to Kevin Schafer speak clearly from the stage with no sound reinforcement, which is a true test of the excellent acoustics within the auditorium.’

‘We love this space, and the acoustics are superb,’ enthused school director Kevin Schafer. ‘We recognised that our local design and supply resources in Oman were limited and unfamiliar with building a theatre. We also wanted to have a vision that was beyond our own concepts at the time. We decided to rely on people who work with these technical issues on a daily basis – like Oasis PPD which has the connections and current knowledge of what works best.’

Handling the lighting side of the install was Schuler Shook. The lighting needed to be incorporated into a space which would be used more than 80 per cent of the time –with the acoustic shell in place. Oasis supplied ETC Source 4 luminaries, which complement a number of Robert Juliat Victor followspots. Schuler Shook also specified an ETC Unison Paradigm system, which controls all house and work-lights in the theatre via a mix of Unison and Sensor Dimmer racks.

“It is unusual and a privilege to work on an auditorium of this calibre in the Middle East, especially as it has been delivered by a local company”

“It is unusual and a privilege to work on an aduitorium of this calibre in the Middle East, especially as it has been delivered by a local company” reflects David Gray. ‘Acoustics and the overall integration of lighting and audio systems for control from one position are mostly ignored on typical auditoria projects as cost is the driving factor. Some of the biggest beneficiaries are the excellent members of my technical team who worked on the project and continue to provide local support.