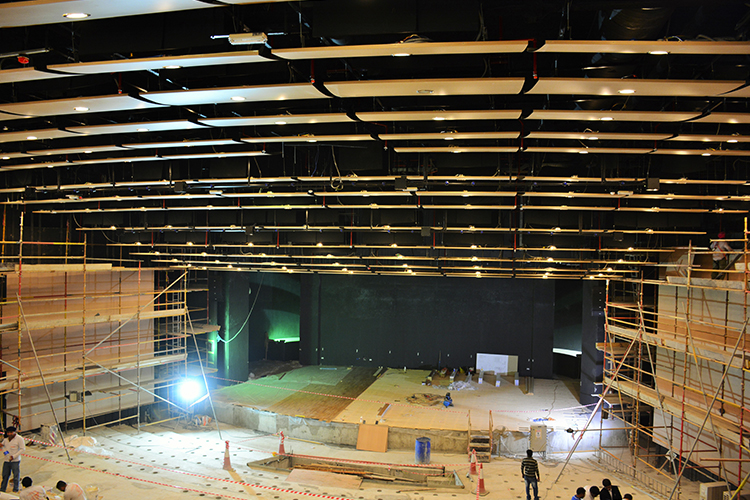 Oasis PPD has created a standard package for its school auditorium design. Heartland International School is just one establishment that has benefited from this approach as James Ling discovers

While every project always throws up its own unique challenges, there is something to be said for taking a standardised approach. If you can start from a pre-designed template for a particular type of installation, then this can be tailored to meet the individual needs of each space.

This is the tactic that Dubai-based systems integrator, Oasis Enterprises Professional Projects Division (Oasis PPD), has taken for school auditoriums. With these spaces usually having a similar design and layout, the systems integrator has developed an audio, video and lighting design based on equipment it trusts that will usually deliver the performance a school requires at a budget it can afford.

One good example of this approach in practice can be seen at Dubai’s Heartland International School. Offering facilities such as dance studios and a black box studio, the Nad Al Sheba-based school prides itself on performing arts. It wanted a professional solution that could highlight this for its main 700-seat auditorium, and this is where Oasis PPD became involved.

‘This project was design and build for us,’ recalls Rajiv Kalandichekkyat, senior sales engineer at Oasis PPD. ‘The developer had called for an A/V design contractor and based on our previous experience and projects we had successfully delivered in this region the project was awarded to us.’

A further challenge for the design was that the auditorium had to meet more than just Heartland International’s needs. During the week the space would be used for school productions. But at the weekend it would be rented out as a performance venue. As such, the system had to be simple yet versatile. ‘We take care during design stage as mostly these systems are handled by IT departments,’ states Mr Kalandichekkyat. They need to be simple to operate hence we ensure that the entire system is integrated by Apple-based control systems.’

Turning to its standard design, Oasis PPD created a solution based around FBT loudspeakers to meet these twin needs. ‘We use FBT because of the reliability and price point of their systems,’ says Mr Kalandichekkyat.

Four of the Italian manufacturer’s Muse 210 LA cabinets have been flown either side of the stage while Subline 218 SA subs provide low frequency reinforcement. Supplementing the main system, six Archon 108 cabinets powered by FBT DPU 1500 C amps have been installed with two on either side wall and a further pair on the rear wall. Processing for the solution is via the manufacturer’s DLM 26 while volume control is achieved with a Crestron C2N-VEQ4. On stage, four FBT StageMaxx 12 MA wedges serve as monitors for the student performers who also have a Shure ULX wireless microphone solution at their disposal as well as SM48S-LC handhelds and CVO-B/C overhead condenser mics.

Away from the stage, performances are mixed using a Soundcraft Si Expression 3 console. This is located in the control room at the rear of the hall, which is also home to much of the audio, video and lighting equipment. With its separate location, audio engineers have the option of monitoring the performance either through Shure SRH940 headphones or a pair of FBT J 5 A two-way active speakers.

The final element of the auditorium’s audio installation is the acoustic treatment. Everything from the wooden panels that cover the walls to the plush seats that fill the tiered space have been selected for their acoustic properties. In addition, the ceiling is filled with Vicoustic reflectors and diffusors which have been angled to create the optimal acoustic performance for the space.

Oasis PPD’s standard model also met the school’s lighting and visual needs. The visual system calls heavily on products from Datavideo, Magenta and TVOne, while a Crestron AV3 processor provides the control. Sources including the JVC Blu-ray player and Datavideo PTZ camera can be displayed via the Christie DWU-951-Q single chip DLP projector on the motorised DaLite screen and monitored from the Sharp 42-inch HD display.

The lighting system draws on a traditional theatrical design. Rather than equipping the hall with moving head fixtures, a variety of ETC, GLP and Coemar lights have been discretely flown from two bars high above the orchestra pit with dimming racks in the wings either side of the stage. These are joined on stage by further luminaires which can all be controlled by the ETC Ion console at FOH.

With Oasis responsible for all of these aspects plus the motorised stage rigging system, the main challenge was the timescale. ‘As in all projects major challenge is time as we had just six weeks to complete the entire project,’ explains Mr Kalandichekkyat. ‘In addition to this, we needed to do lots of customisation to the various products which stretched the timeframe even further.’

Having overcome this challenge, the Oasis PPD team are happy that the work done meets the needs of the school and more. ‘We are pretty much satisfied by the end result and the client seems to be happy with our job,’ offers Mr Kalandichekkyat. ‘Major schools require such facilities for their own functions or activities such as annual events, performance arts and so on. There is also the possibility these spaces could be rented out. As such, having a standard design offers plenty of advantages and means schools can rely on a system to meet all of these different needs.’

While the project at Heartland International highlights the success possible from taking a standardised design approach, Mr Kalandichekkyat is keen to state that the design itself also needs to be flexible. ‘Projects like this help us adapt and improve our overall standard design and we are always looking for ways to build on it,’ he reasons. ‘Currently we are looking at the possibility of integrating the electrical system with renewable energy, such as solar panels.’

Having got full marks from Heartland International and with the number of school facilities in the UAE constantly increasing, Oasis PPD is sure to get plenty more opportunities to use and fine tune its standard auditorium design.