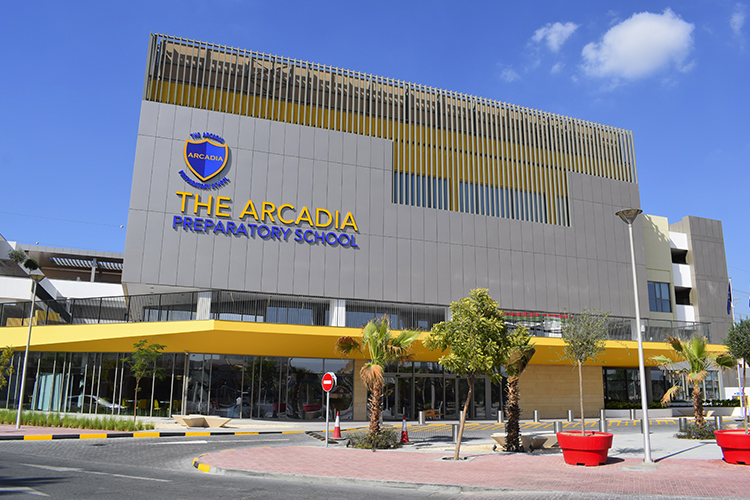 The Arcadia Preparatory School is making waves in Dubai’s education market. It is trying to create a warm and open environment with its flexible learning spaces, while also being an IT-rich facility that equips its students for the future.

‘We’re very much about a holistic, enriched curriculum,’ explains Arcadia School’s principal,Graham Beale. ‘It’s not just the core academic subjects, it’s everything. We have a longer day for our older children and into that we put a range of things that would usually be done after hours. They have a mixture of curricular activities that normally parents pay for in Dubai. We call it an enriched curriculum. It’s doing ballet, football, yoga, we have a happiness programme and an entrepreneurship programme all built into the school day so parents aren’t charged extra for that and it’s part of us enriching our children in terms of the curriculum.’

This ethos has seen a huge investment in technology right through the school. From the ID Card-based access system to the one-to-one iPad policy for all students, technology has been integrated into every space. One area where this is most apparent is the school’s performing and multi-purpose hall.

‘We wanted to be a leading edge school, we thought we are starting a new school, we may as well go at the leading edge of it, not the trailing edge,’ furthers Mr Beale. ‘That is what we have tried to do with our performing and multi-purpose hall with the technology. We want children to be sporty and physical, but also arty and performing and creative. You need spaces that allow that and we wanted to use that space in a way that allowed both those things to happen.’

The school turned to Oasis Enterprises Professional Projects Division for the design and installation of a solution for the space. The systems integrator is no stranger to school projects, and has developed a set of standard equipment that it supplies to these settings. However, the dual nature of this facility meant that this approach would not work.

‘We didn’t just want the place to be a sports hall, we wanted it to be a place for performance because we don’t have an auditorium,’ furthers Mr Beale. ‘We invested pretty heavily into our sound system because often sound is lost and it’s the worst aspect. Ours is working perfectly. We could have tried to scrimp and save, but we thought we would invest properly into it, so it’s high-quality and it will last, and our children will be the stars. If they go up on stage there’s high-quality lighting and sound systems and it works. In a way we feel that also reflects the standards of our school.’

The installed solution comprises an FBT sound system distributed around the hall controlled via a Soundcraft console with a variety of Shure mics acting as the source. A combination of static and moving head LED lights which are controlled from an ETC desk have been installed to add an element of performance. Both of these systems also include iPad control which allows the older students to mix shows themselves and forms another technological teaching aid. Finally, the video portion includes a pair of fixed PTZ cameras as well as two shoulder cameras for roaming operators, a Datavideo recorder, a Panasonic projector and a motorised screen.

The added advantage of taking this technology-centric approach has been in an extra service that the school can offer. ‘Live streaming is a feature that our parents really like,’ says Mr Beale. ‘They can see a prize giving, they can see a show live online and let the grandparents know about it as well.’

‘We think we’ve created something very special here,’ he continues. ‘On our opening day we brought the parents up here, turned the lights on, played some music and they were very impressed with it.’

Reflecting on the decision to build the multi-purpose hall in this style, the principal believes the school made the correct decision. ‘We have deliberately invested heavily into here because we think it is a unique feature for our school in terms of what we want our children to be able to do,’ says Mr Beale. ‘Even though they are primary pupils, we didn’t see that as a block.’

With appetites whetted from this project, the school is now looking to add further entertainment style facilities to its campus. ‘We have plans to create a little TV studio,’ reveals Mr Beale. ‘We’ve drawn the plans up but haven’t invested into it yet, that’s still a year or two away. We also have the space for a radio station in here. We want to be an innovative school. We’ve come in at the right time with the right way of doing it.’

The students passing through Arcadia may still only be young, but the experience and skillset that its focus on technology brings them may well inspire some to pursue a career in our industry.