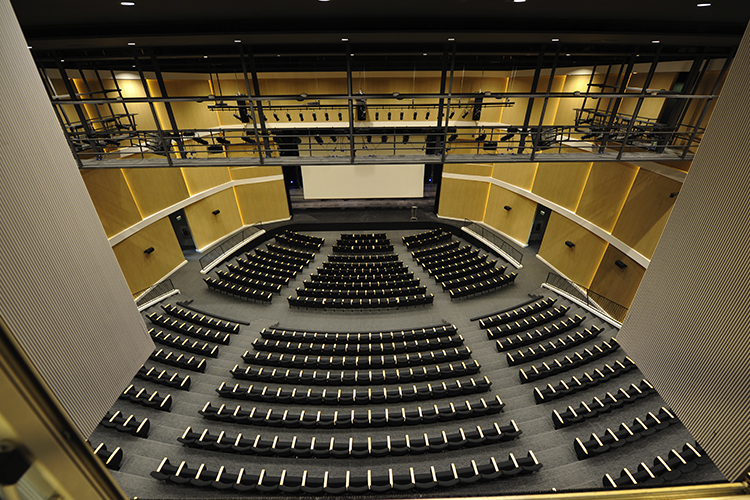 GCC: Oasis PPD delivered a wealth of high-end technology to meet the needs of the American International School of Riyadh.

The technical needs of a school auditorium have changed beyond recognition over the last few years. Theatrical systems have always been an important component of these performance areas, but increasingly they are rivalling the functionality of professional spaces. The American International School in Riyadh is a classic example of this. While the auditorium boasts a sound, rigging and lighting setup that many theatres around the world would be proud of, it adds to this by offering students a full TV studio with streaming capabilities and an acoustic shell to enhance a performance.

‘It’s a real challenge walking into a space where the orchestra pit is too low at slab level and a full steel platform has been installed in the fly loft where hoists had been planned. I had been studying plans on the plane and rapidly realised it had not been taken to detailed design,’ muses Mr Gray.

The job of designing and installing these systems fell to Dubai-based systems integrator, Oasis Enterprises Professional Projects Division (Oasis PPD). Following a successful project delivery on the Bosch Auditorium at The American International School of Muscat (TAISM), The American International School of Riyadh (AISR) approached Oasis for assistance developing a theatrical consultant’s schematic design which had been purchased with the new design package for the auditorium. As the construction of the Auditorium was in full flow, it fell to David Gray, architainment division manager, to assist with the updated design. ‘It’s a real challenge walking into a space where the orchestra pit is too low at slab level and a full steel platform has been installed in the fly loft where hoists had been planned. I had been studying plans on the plane and rapidly realised it had not been taken to detailed design,’ muses Mr Gray. ‘I became unpopular with the general contractor but the client was very supportive in their goal of achieving a world class auditorium.’ As Oasis corrected some of the initial issues, further challenges were revealed. ‘The removal of the fly loft steel platform coincided with the appearance of a hole at the rear of the stage with AC ducting prodding through the proposed cyclorama location,’ recalls Mr Gray. ‘A misunderstanding meant the crossover between the fly loft and auditorium did not exist and had to be adapted with some steps and an opening through the concrete proscenium wall. It was not only A/V or lighting integration, we were instrumental with changes required to fix the building.’

The systems integrator has developed over 12 auditoria as design build projects in the GCC region over the last five years and its experience and understanding of the basic requirements of a performing arts space is frequently drawn upon when the client has not continued with the specialist theatre consultant through to completion. ‘This includes acoustics, fully dimmable LED house lighting, performance rigging and co-ordination with HVAC and MEP services in particular,’ smiles Mr Gray. ‘We still haven’t figured out a way to project light through a 60cm AC duct but the AC guys keep testing.’

On the pro audio side of the project, the main theatre features an Outline Audio Eidos 2?5LA FOH system supplemented by FBT cabinets for the surrounds and a Tannoy ceiling solution for announcements via the LDA audioTech PA/VA system. Added to this are Shure wireless microphones, a Soundcraft Si Expression 3 console, Clear-Com comms and equipment from Avalon, S-Tech, TASCAM and TVOne as well as the Wenger acoustic shell.

Away from the pro audio solution, A/V in the school auditorium is driven by a Crestron AV3 processor with associated panels while an Ampetronic assistive listening system aids the hard of hearing. Visually, Christie 10K Roadsters fire onto Da-Lite screens, taking their feeds from either the Datavideo PTZ cameras or the Denon Blu-ray player. The lighting system, meanwhile, draws heavily on the ETC catalogue with the manufacturer supplying a range of fixtures as well as the dimmers.

Completing the setup is a high-end rigging system. There is a full curtain system from Showtex with cyclorama, but the highlight is the ETC Prodigy hoist. ‘Initially with the hoist designs it was a pile winch and we said “don’t go for that, the ETC Prodigy would be much safer?,’ explains Rajiv Kalandichekkyat, senior sales engineer at Oasis PPD. ‘The engineering is very simple, the dynamic load is not on the walls, there is a compression tube system in the Prodigy system which absorbs and disperses lateral loads on building steel.’

‘This is one of the first auditoriums we’ve done where they stipulated they didn’t just want simple cameras, they had to have some playout and data management.

Taking performances at the venue to a wider audience is the attached TV studio. ‘Once we had the theatre design completed, they thought about having a TV studio. There was excess budget and we were able to do something,’ recalls Mr.Kalandichekkyat. ‘We have the high-end JVC cameras, then we have a vision mixer from For-A, an Evertz clock system then we have also used equipment from Datavideo, Extron and companies like that. It is a simple TV studio with a three-camera setup with a broadcast lighting system from Desisti and dimmers from ETC.’

The studio also ties in to the theatre system to broadcast performances around the extensive campus. ‘This is one of the first auditoriums we’ve done where they stipulated they didn’t just want simple cameras, they had to have some playout and data management. We did this with a Cinegy ingest system,’ says Mr.Kalandichekkyat. ‘We wanted to have a streaming feature. All the cameras have encoders and can be streamed. They have an IPTV network so any of the classrooms can receive the streamed feed. They were future-proofing themselves.’

Refecting on the installation, the Oasis team are happy to have delivered a solution that went beyond the school’s expectations. ‘The client was great, they are still with us and are possibly going to give us more work,’ smiles Dave Gold, operations manager at Oasis PPD. ‘It’s a nice system. They are happy with what they have and want service support from us even though we are not in the country.’

‘The theatre has been extensively used on a daily basis, it’s a proper performance art theatre,’ reflects Mr.Kalandichekkyat. ‘They are one of the few customers who I have seen who are using the auditorium to the fullest. They are using streaming, they are doing vision mixing, proper theatrical drama with the shell moved around and things like that.’

While the theatre has been designed to standards most professional spaces would be proud of and the attached TV studio provides extra functionality to future-proof the school, it is the daily use that is the most pleasing aspect. This gives students the kind of learning environment that will serve them well should they choose to enter the industry.